by Vincenza Santangelo, PhD in Quality of Design

The visual map below is the result of the project “Reintepretation. Abandonments as potentialities” coordinated by Vincenza Santangelo with the students Marta Chiogna, Elena Maranghi, Yasmin Sarah Menouer, and Antonio Maria Privitera within the workshop “Teatri Abitanti. Architetture per i beni comuni” by Marco Navarra, 24-30 April 2012, Teatro Valle Occupato, Rome. 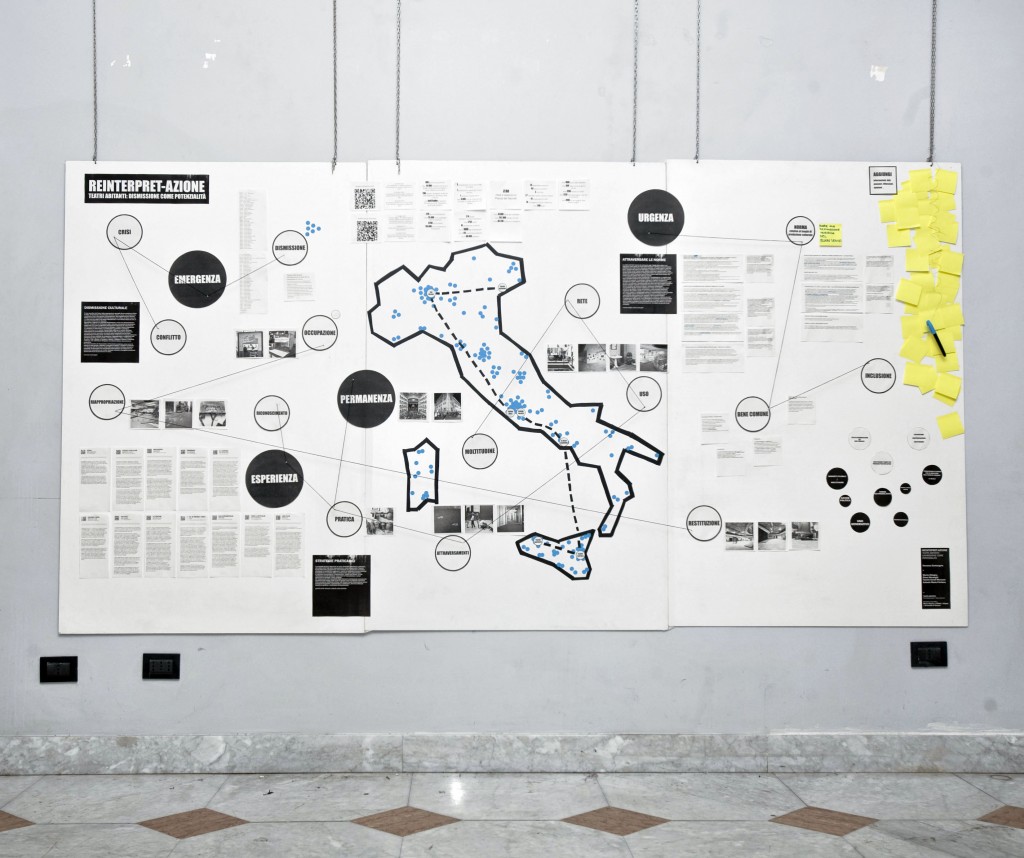 The abandonment of the Valle Theatre in Rome is a typical model of a widespread condition in Italy of abandoned theatres; a result of cutbacks in funding, poor political choices and obsolete planning. Despite the constant demand for cultural spaces, almost every town from Northern to Southern Italy has an abandoned theatre, closed for years, often converted into storage. The theatres represent an architectonic heritage which have been emptied of their meaning and reflect a general disinvestment in culture. 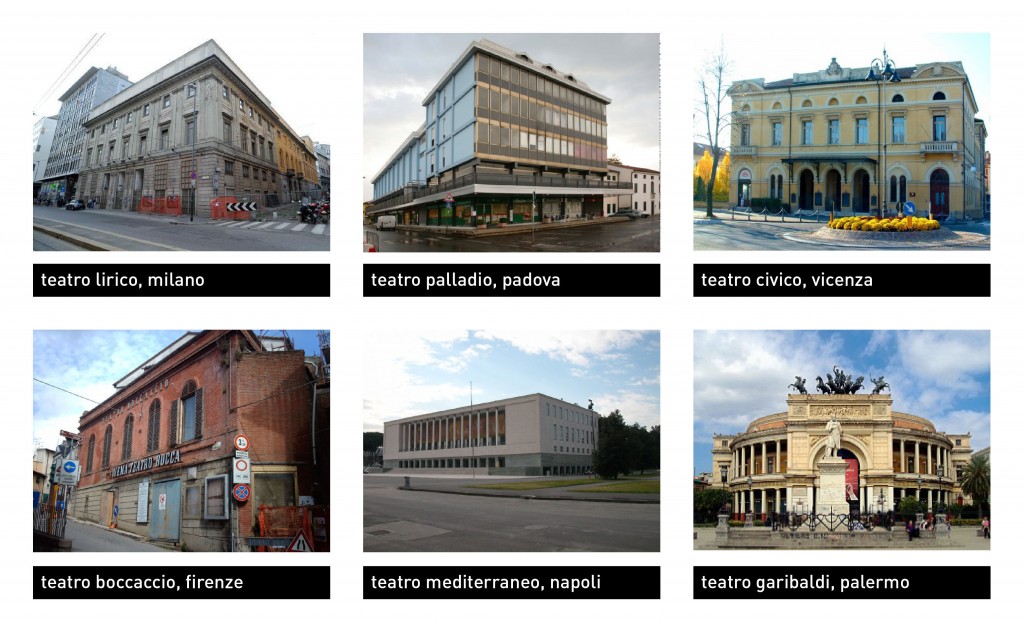 Examples of abandoned theatres across Italy

The student project embodied a quantitative investigation of abandoned theatres in Italy, the work illustrates and summarises the phenomenon with the creation of a visual atlas.  It highlights a densification of abandoned theatres within large cities, but also the sporadic spread of abandonment across Italy especially in the South – mirroring the investment in cultural buildings since the 1980’s, often lacking management and planning programs.

In this era of progressive abandonment, emerges the first form of activation for this heritage asset through different modalities of occupation, (re)appropriation and restitution to the community of some theatres: Valle Theatre and Cinema Palazzo in Rome, Marinoni Theatre in Venice, PAC in Milan, Coppola Theatre in Catania, Garibaldi Theatre in Palermo, which together outline an Italian network of “proactive resistances”. They represent uncommon and alternative management modalities, as well as creative reinventions of the codified spaces of a theatre – stemming from new strategies for reactivation and rethinking overall design strategies for cultural buildings. 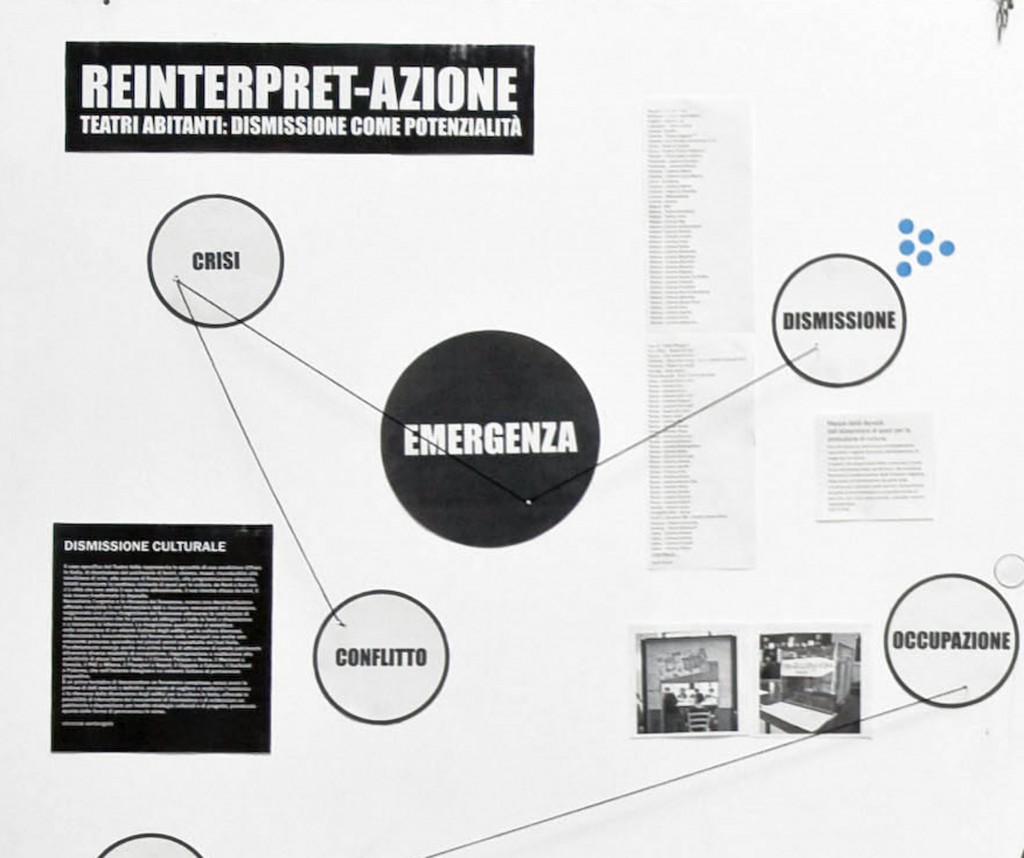 Despite the urgency and importance of the phenomenon, there is still a lack of official (comprehensive) documentation to collect data on the abandoned structures and tactical devices for intervention, proposing the need to create such documentation. 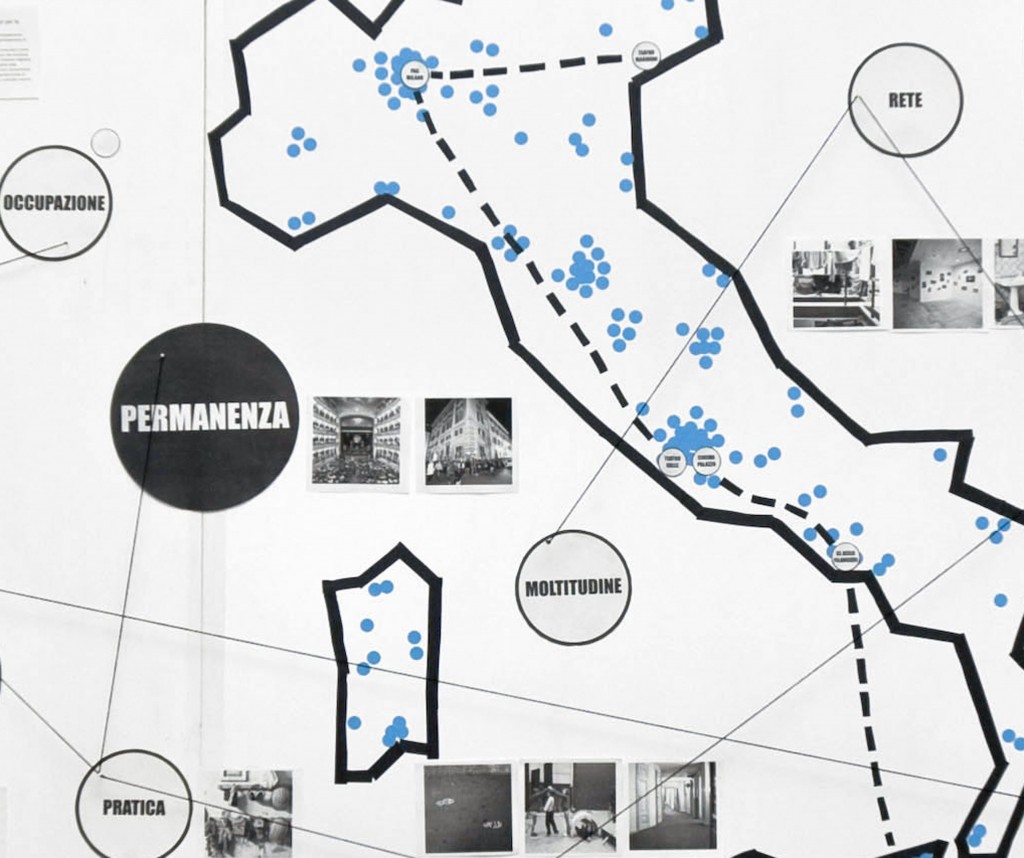 Across Italy there’s an increase of initiatives to occupy, restore and provide restitution to the community for some of the abandoned cultural buildings by groups of artists who are (re)activating/ engaging planning by suggesting alternative uses for these spaces. 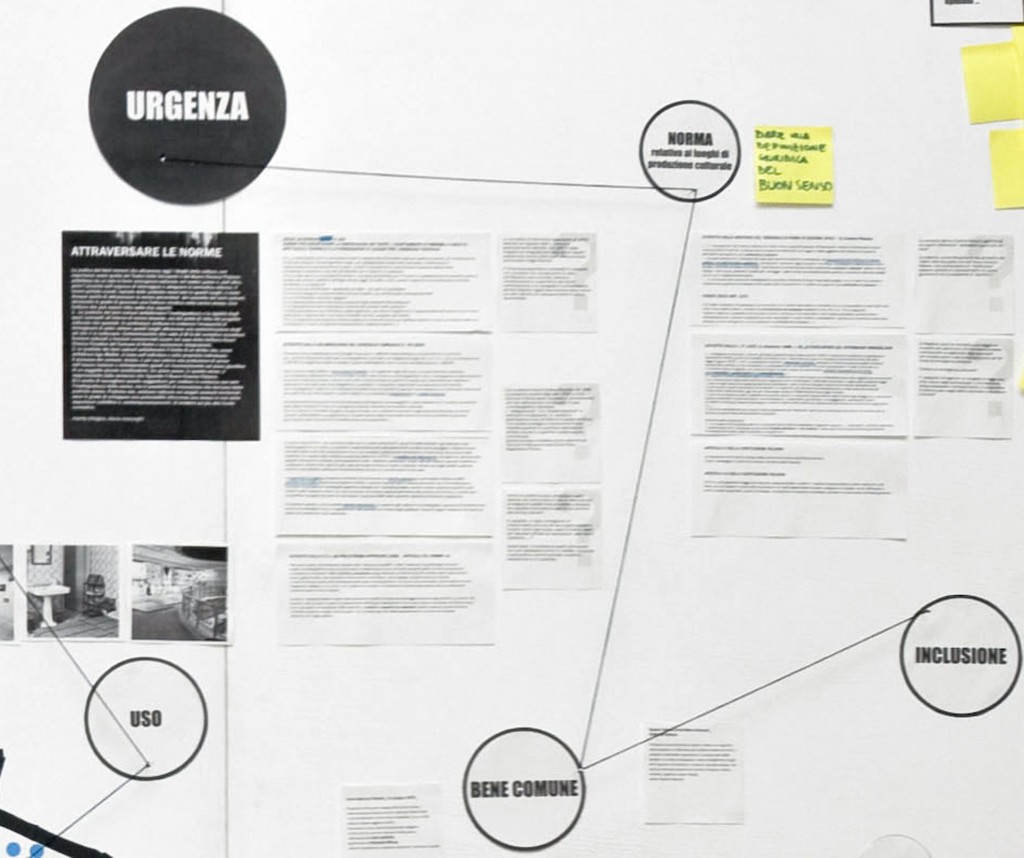 The contamination of different arts, the consequent demand for flexible spaces and current debates around common goods all highlight the urgency to rethink the regulations and incentives to construct and manage cultural buildings. 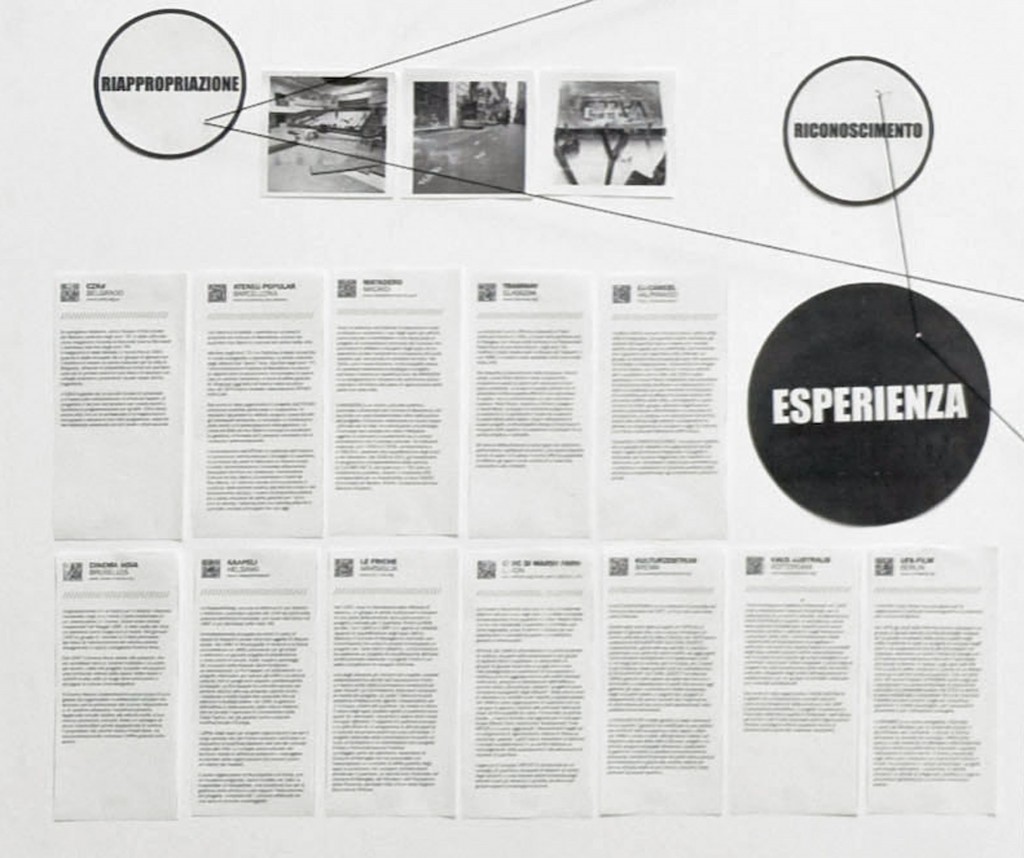 The image above depicts a collection of international projects for the (re)appropriation of unused public buildings primarily burgeoning from the mobilization of citizen groups: the CZKd in Belgrado, the Cinema Nova in Bruxelles, the Kulturzentrum in Brema, the Matadero in Madrid, the UFA-Film in Berlin and many others. These case studies trace strategies, actions and instruments which led to the acknowledgement and to the support by the administration for the occupation and self-management of the public buildings. 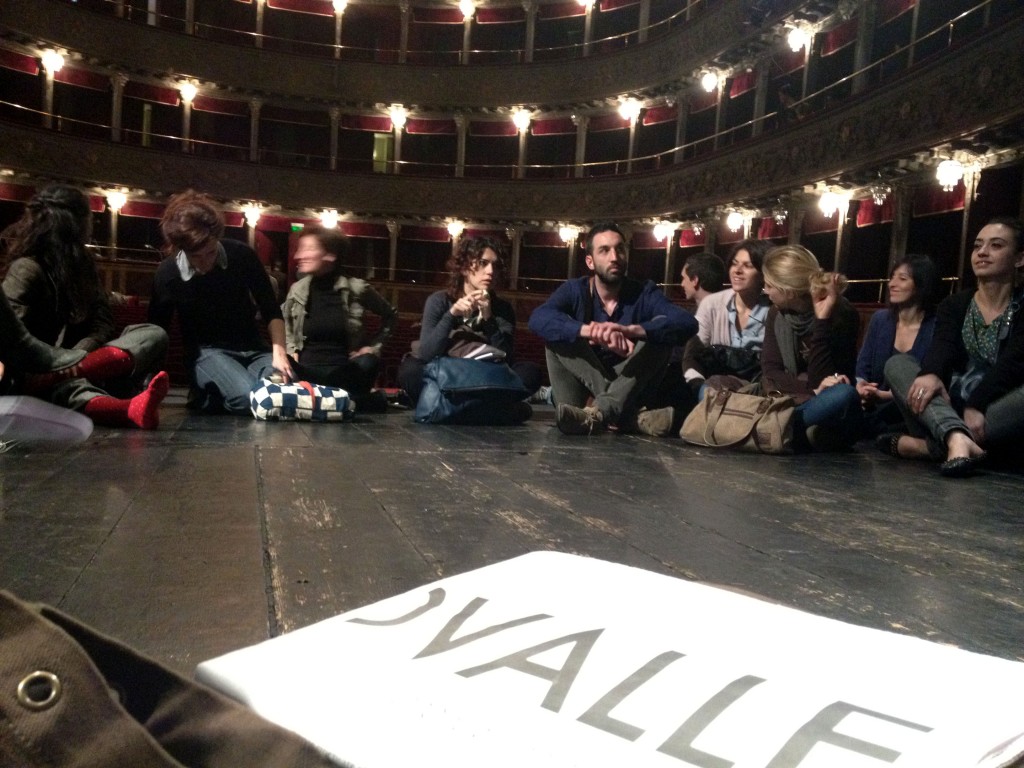 Vincenza Santangelo is an architect and holds a PhD in architecture and urban planning as an International Doctorate QuoD – Quality of Design.  Her thesis focused on interrupted public works in the Italian landscape.

She has been involved in national and international research projects and in design competitions and exhibitions. Her contributions have appeared in several publications, among which are Urbanistica Informazioni, Compasses. Architecture and Design, and Ailati, Catalogue of Italian Pavillion of the XII Biennale of Architecture in Venice.

She’s a co-founder and co-owner of the architecture resource website – ARCHIvitamins.

AF is in the process of discussing possible research plans to advance the study into abandoned theatres in Italy by cataloging project examples and tactics with Vincenza  and how the work might begin to fulfill the resource void aiding both communities and government agencies wanting to (re)activate cultural assets around the world.