The AF team has prompted, engaged with and supported student work as a way of challenging and examining the research from a variety of perspectives.

Several final year and MSc students have explored areas of adaptability and written their dissertation on the topic. AF has also prepared, lectured and marked coursework on the topic tailored to a variety of construction industry disciplines. We have hosted a student competition and have supported student entries into other competitions.

AF also coordinated two workshops for students to engage in realistic considerations of balancing how to adapt existing buildings and design new more adaptable spaces to fit the dynamic needs of the users and community. They brought together different universities, cultures, disciplines and scales of investigation to visualize possible implementations framed by the local authorities and the AF research, providing a platform for students to engage in a creative environment with other students, the local authority, business organizations and community members to promote their design ideas.

Below are some examples of student work. We look to continue to engage with students in a variety of ways and encourage students to engage in the topic, post and discuss their work. 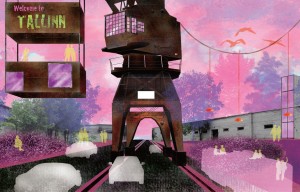 Port regeneration has been a hot topic among urban, landscape architects over the last few decades. This is most probably because port areas have a large accumulation of land, architectural stocks, nodes of transportation, and the appeal of the waterfront is irresistible to many visitors and locals alike. Tallinn, like many great waterfront cities, hosts a well-established commercial port, with the charming old-city and central station in close proximity. But, the role of the port is rapidly changing, from a major commercial port to a visitor oriented ferry, cruise terminal, with the cargo ports moving to the suburbs. A great length of coastline is left without any proper maintenance, much less any pavement or amenities. The street plays an enormously important role in connecting the fragmented roles of the port with the existing city and suburbs. It is the artery of the metropolis, bringing in and out, people, goods, and events. The urban fabric will not change drastically only strategic changes within the streets supported by surrounding/paralleling areas, open spaces, and facilities.

Bringing Mobility into the story

Large cargo cranes are magnificent relics of the Hanseatic technology and industry, and instead of destroying them into steel chunks, we can create new crane rails along the new PÕJAVÄILÄIL, where cars, pedestrians, port vehicles, trams, and cargo cranes move linearly. The cranes, as well as converted trucks can carry containers with art exhibitions, workshops, library hubs, food wagons, and move freely along the streets. The beauty of “mobility” is that it creates a ‘story’ when it moves, just like when a parade strides along the streets – it meets people, interacts with the ever-changing environment, and creates a pulse in the urban fabric – an ‘Urban Spectacle’ in a true sense.

Tallinn, as much as it may be famous for its Hanseatic Culture, has a growing IT industry, which the ubiquities of free WiFi-hotspots show along with a hot art scene. In our proposal, we try to merge the two with the landscape master plan, creating Wifi spots along pedestrian walkways and among grassy parks. Artists can show their works in containers, which go around the district with the help of the cargo cranes, or in renovated warehouses, which can be a good tourist attraction with their proximity to the ferry terminal. 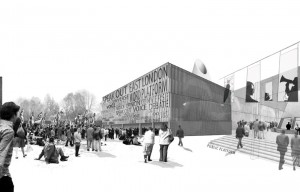 The Adaptable Futures group sponsored a Diploma Prize for best Film exploring a time-based architecture at The University of Westminster (2010-2011 academic year).  The competition was won by DS17’s James Kirk for his film, ‘A Productive Landscape for the Lower Lea Valley’.

The approach to the adaptability of the design is in the ability of the master plan and architectural production process that I have set up to respond to the constantly changing needs of the proposed Lea Valley settlement, as well as the surrounding city of London. The proposal does not dictate or presuppose the future density or lifestyle of the city and its inhabitants that is unpredictable, but sets up a framework in which a number of architectural futures are possible.  The various housing densities, and architectural responses, shown are not necessarily an evolution, but a series of potential futures for the site, all of which are possibly dependent on the future needs of the city. 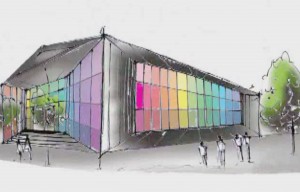 Students from De Montfort University participated an intense one week workshop generating design ideas for adapting the Cultural Quarter in Leicester through the production of a short film (link short film).  Students from Loughborough University were assigned a project as part of their coursework to look at the opportunities and barriers to adapting the same set of buildings in and around the cultural quarter. The work culminated in a half-day workshop attended by the local authority, practitioners and the students who gave presentations and lead group discussions focused on each individual building.  Read more about the results here (link to pdf). 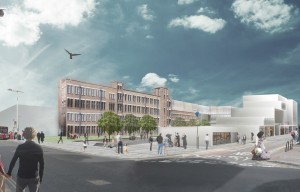 Students from The University of Tokyo visited the UK and acted as the glue throughout a week filled of events with community members and practitioners along with exchanges with students from different universities and disciplines.  The intense programme held both in Peckham and Loughborough was designed to allow for a variety of learning opportunities maximizing exposure to UK conditions.  Students from Loughborough University were assigned coursework investigating the same set of buildings and exchanged initial insights into the opportunities and barriers with the Japanese students. The main output for the week was a short film by each group which can be viewed on the video page.  Students returned to Japan to focus on individual design proposals as their studio projects for the term.  A summary of the workshop including student work and several essays written by participants will be published by The University of Tokyo cSUR group.